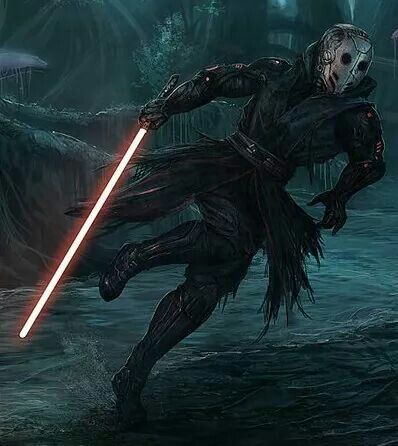 Faction(s): Unaffiliated
Race: Human
Age: 26
Gender: Male
Height: 5'8
Weight: 155 lbs
Physical Features: Cirin seldom removes his mask, if he were to do so you would gaze upon a disfigured visage. Very little of his face has been untouched by burns and scarring, the left cheek has torn open in places revealing the whites of the teeth beneath. Small strands of black hair roots still patchwork his bald head almost like a botched close shave. Forest green eyes pierce through the horrific scene that makes up Cirin's face. What remains of Cirin's nose is merely the cartilage that once held it in place.

While less severe the scarring continues further down his body leaving many wounds overlapping. A lightly toned structure to his muscles shows the more physically demanding portion of his occupation. Calloused hands give the impression of someone who is not afraid to get their hands dirty.

Clothing/Accessories: Having a great fascination with the Ancient Sith has led Cirin to style himself much after them. Dressing in a tattered and torn black cloth robe, a utility belt girded around his waist containing all but the most specialist of tools he needs for archaeology.

Cirin's head is full encased in a helmet made of a thin layer of durasteel, too thin to provide any real protection it purely serves to cover his grotesque appearance. Two fathomless holes level with where Cirin's eyes rest are all that allow him to look upon his surroundings. Four openings around the lower portion of the mask allow for him to breathe through the mask.

Personality: Taking a great interest in relics and lore of the past Cirin has a curious mind, if a question is presented he works relentlessly to find a satisfying answer. At times cold and calculating in his approach to most things showing wisdom beyond his age, the recklessness of his youth tempered quickly by events that left him scarred.

Even at a young age Cirin was fascinated by the legends of the Jedi and the Sith facing one another in great battles. This fascination eventually focused only on the Sith can sometimes be considered an obsession. Cirin's injuries can be a source of constant pain when not managed by medicinal products. He at times allows such pain to fuel his drive to amass knowledge and power. His interest in the sith has led him to adopt their way of life although never receiving any such training as a member of their order.

Cirin prefers to handle things in as efficient a manner as possible with little to no effort required from him being the most optimal outcome. That being said he is not adverse to getting things done by his own hand. Cirin holds little regard for anyone who he deems beneath him and is certainly not above sacrificing them for his own gain. Possessions:

Galactic Databanks wrote: Humans
Hailing from various planets throughout the galaxy, humans ingenuity and migrations made perhaps the most common race in the galaxy. Humans can start with 1 free skill points in any skill they so desire. Physically they are considered the baseline from which other species are described. Generally average, humans are versatile. Human physiology don't have any given advantage, but likewise a lack of disadvantages make them solid all-rounders.

Modifiers:
Stats (14/38) Skills:
Spoiler: History
Born on a frontier colony within the unknown regions lying beyond the outer rim. Cirin learnt very early on the way of the galaxy, if you wanted something you worked for it. His father unbeknownst to Cirin was a disgraced Jedi knight cut off from the force and sent into exile for choosing Cirin's mother over the order. As far as Cirin was aware his parents were nobodies from nowhere their only hope in life to be successful in the cultivating of this colony. Cirin also learnt another truth in the galaxy rather early on. The colony was doomed to fail.

The Republic had cut funding to the venture only a few weeks into the colony being established. Since then the colonists had bounced from benefactor to benefactor accruing large amounts of debt. Eventually being passed onto a crime lord by the name of Vega the Hutt, a member of one of the minor Kajidic within the Hutt Cartel. It seemed to be a peaceful and prosperous venture at first, this was until the Hutt found the Colonists unable to turn him a profit. So he used the only resource the planet had available to him. The first slavers showed up only months after the Hutt had taken over, taking Cirin's mother away and killing Cirin's father when he attempted to stop them.

The boy himself was taken to work for the Hutt for the majority of his youth. He picked up a knack for delving into ruins under the tutelage of the Hutt's best thieves. Cirin began to discover an unnatural luck to some of his actions. Sometimes it was simple things, like knowing when not to enter the room during one of Vega's temper tantrums. Other times it was almost as if he could feel the presence of every thing around him.

During his teen years the Hutt had sent the young boy and a group of his best thieves and enforcers to steal from an ancient archive located on the planet Voss. The object they were to obtain was a statue of some cultural relevance lost to time intended for a private collector. Vega intended to sell the statue on to this mysterious collector.

The job itself was a nightmare from the beginning, the archive had been laced with all manner of traps and contraptions. The first of Cirin's injuries was gained this way as a laser grid stopped short of taking his right eye. A large burn mark was left on his cheek as reminder of this encounter. Many other members of their group were not so fortunate. It was during this raid upon the archive that Cirin first came across an old tablet detailing the Sith's first visit to Voss and subsequently the arrival of the Jedi. The teen was instantly hooked to the story contained on the tablet but much to his dismay had to leave the tablet behind.

Over the time serving the Hutt the young Cirin began to collect as much information on the Jedi and Sith as he could possibly get his hands on. Using contacts he had formed during his servitude to Vega and any other means at his disposal. Cirin was one of the lucky ones eventually managing to work himself to freedom at still a young age, a feat few managed to achieve.

Striking out as a freelance archaeologist and tomb raider Cirin went out to learn more about these opposing orders, while there seemed to be plentiful knowledge on the Jedi it seemed that information pertaining to the sith was heavily regulated and in some places outright restricted. Through a series of rumours and legends Cirin learnt of an ancient Sith burial site on a planet known as Korriban.

Upon setting down on the desolate tomb world Cirin felt a mystical power to the tomb. A great edifice carved into the stone, a monument to the ancient order that had ruled the galaxy through their might many thousands of years ago. Entering into the grandiose structure before him Cirin had no idea how unprepared he was to face this ordeal. His expedition was less than fruitful, upon entering the tomb he incurred the wrath of a slumbering sith phantasm who dwelled within. The resulting power displayed by this ancient spirit inflicted a great deal of injury and pain upon Cirin leading to his deformity.
Top
Locked
1 post • Page 1 of 1